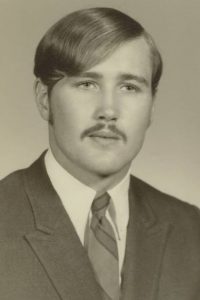 Jimmy lived his life in wonder and adventure.  He was a motorcycle enthusiast.  He was proud to have owned some of the sharpest Harleys and choppers around Southern Illinois through the ’70s and ’80s.  Jimmy had a natural and distinct style, influenced by his travels in the Southwest and expressed in leather and suede fringe jackets, hand-crafted turquois and silver jewelry or by his signature look of leathers and a do-rag.  As much as Jimmy cherished any possession of his, he would happily hand it all over to anyone, whether he knew them or not, if he thought they could use a hand in life.  He was generous to a fault, but that is one of the things that made him stand apart from most.  Jimmy was kind in a world that needs more kindness.  He was also funny.  He had a quick wit and was infamous for some epic childhood pranks.  Jimmy was also gifted in creative art.  At times in his life, he dabbled in painting and sculpting, creating some impressive pieces, expressing his interest in spirits and his passion for wolves.  Jimmy loved music.  If you take a minute to listen to Emmylou Harris, Lynyrd Skynyrd, The Rolling Stones or most old classic rock artists, you’ll be listening to the soundtrack of Jimmy Evan’s life.

Memorial Contributions may be made to Shriners Hospital for Children.

Funeral: Services will be held at Heil-Schuessler & Sinn Funeral Home in Sparta, IL on Saturday, December 28, 2019 at 11:00 a.m. with Pastor Dennis Hamilton officiating.