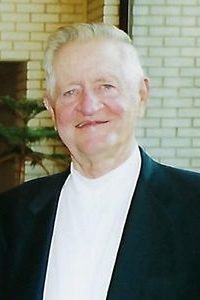 Jerome P. “Jerry” Wade, 88, of New Athens, IL born January 10, 1930 in Belleville, IL, passed away on Monday, June 25, 2018 in Belleville, IL. Mr. Wade honorably served his country as a member of the United States Navy during the Korean War. He was a manager of the State of Illinois Unemployment Services in this area. He was a member of the Belleville Barbershop Singing Group and the C.M.V. Mr. Wade was also very active with organizing his High School Class reunions.

Mr. Wade was preceded in death by his beloved wife; Jacklyn C. (Borger) Wade whom he married on September 5, 1953 in New Athens, IL and who preceded him in death on March 21, 2009 his parents; Charles and Margaret (Toomey) Wade, 2 brothers; his identical twin Terrence Robert Wade, and Charles Patrick Wade and by his 2 very special and loving aunts; Ada Windsor and Ella Baumgartner

Memorials; Memorials are encouraged to be made to the New Athens Home for Aged in New Athens, IL

Funeral: Services will be held at 11 a.m. on Friday, June 29, 2018 at Heil-Schuessler Funeral Home in New Athens, IL with Terrence Wade and Anthony Marmon officiating. Burial will follow the services at Oakridge Cemetery in New Athens, IL.