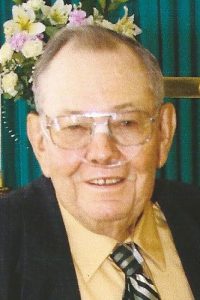 Mr. Feig was a farmer. He was a United States Army Veteran. He was a member of Trinity United Church of Christ in Biddleborn, IL. Jim served his church in numerous ways and was instrumental in several building projects including the church pavilion. He helped organize the first Schlachtfest at Biddleborn and served on the committee for 28 years. He was a member of the Marissa Masonic Lodge #881, past master; Scottish Rite Bodies of So. IL; Ainad Shrine Temple; Ainad Legion of Honor; Amaryllis Chapter #750 Order of the Eastern Star, past patron; St. Libory American Legion; St. Clair Co. Farm Bureau. He was a past member of the St. Clair County Pork Producers and the Marissa Fire Department.

He was preceded in death by his parents – Norman and Elfrieda, nee Hinz, Feig. His parents-in-law – Fred and Frieda, nee Schaeferle, Erb. One daughter – Jodi Feig. One son – Mark Feig. Four brothers-in-law and one sister-in-law.

Per Jim’s wishes in lieu of flowers memorials may be made to Trinity United Church of Christ; Biddleborn Cemetery Assoc.; Marissa Masonic Lodge or the Amaryllis Chapter Order of the Eastern Star.

Funeral: Services will be held at Trinity United Church of Christ in Biddleborn, IL on Saturday, December 6, 2014 at 10:30 am with Rev. Nancy Shubert officiating.

Interment: Burial will be held in the Biddleborn Cemetery in Biddleborn, IL.