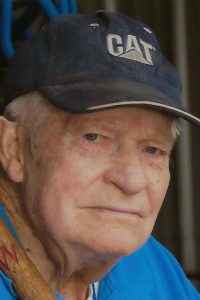 Jake was raised in rural West Plains, MO where his parents and 3 brothers are buried. Jake was a Sargent in the 89th Infantry 353rd Regiment in World War II participating in the Battle of the Bulge, the crossing of the Rhine River and participated in the liberation of the Ohrdruf Concentration Camp, the first Concentration Camp to be liberated. Jake received 2 Bronze Stars and the Combat Infantryman Badge while in the service.

Jake followed this with a lifetime career in the transportation business and enjoyed many years of post-retirement working at Wrights Do It Center. Jake was a 50 year plus member of the Boy Scouts of America serving as Scoutmaster at Troop 529 in Belleville and a Committee member at Troop 327 in Marissa. Jake received and achieved numerous Scouting awards thru his 50 plus years including the Silver Beaver Award. However his most cherished award being the Scouters Key for working with youth. Jake was a member of the Veterans of Foreign Wars at the New Athens Post 7710 and the American Legion Post 0565 in New Athens.

He was preceded in death by his parents, brothers – Louis, Ralph and James and wife Elenora.

Funeral: A mass of Christian burial will be held at St. Agatha Catholic Church in New Athens, IL on Tuesday, April 4, 2017 at 10:00am with Father James Nall officiating.

Burial: Interment will be held in Saint Boniface Catholic Cemetery in Evansville, IL.