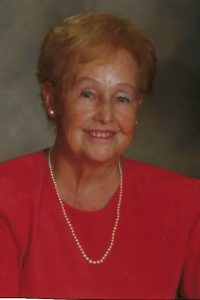 GROTH, Joy Arlene “Dee,” 90, passed away peacefully Thursday, April 16, 2020, showered with love and prayers and with family by her side, at St. Paul’s Senior Community in Belleville, IL. Dee resided at St. Paul’s for only two months, having lived at Cedar Trails Assisted Living for six years after selling her home of 37 years in New Athens, IL.

Born Joy Arlene Brines on June 17, 1929, just months before the market crash which marked the beginning of the Great Depression and nicknamed “Dee,” she learned early on to “waste not, want not.” When she was only eight years old her father suffered a stroke and her mother, Meoma, took over the family business, a repair garage in North St. Louis, across the street from Lee Groth’s grocery store. Dee’s job was to get dinner on the table every night; her older sister, Betty, was charged with cleaning the house. Cooking delicious food for people she loved became Dee’s trademark.

She was a proud graduate of Central High and went to work for Southwestern Bell after high school. Meoma and Lee conspired to find a match among his sons and her daughters, thus Ralph and Dee were introduced and married August 19, 1950, on the eve of Ralph’s entry into boot camp at Fort Leonard Wood to serve in the Korean War.

Dee and Ralph settled in Florissant, MO, after the war and were active members of Atonement Lutheran Church, where they formed many life-long friendships. Dee joined, and ultimately presided over Atonement’s Mothers Club and Married Couples Club.

Living through economic adversity and the sacrifices of World War II and the Korean War shaped her personality. Despite hardship she carried herself with lightness, grace and humor. Dee loved a party and rarely turned down an invitation. For many years her daughters spent Saturday nights with Grandma Brines and Aunt Betty while she and Ralph enjoyed house parties with friends. They seldom missed family gatherings, weddings, funerals, graduations or granddaughters’ performances and events. In later years they loved travel— first entertaining IGA retailers through Wetterau Foods and later, spending the month of February at Port Isabella, Texas, a haven of beaches, sunshine and relaxation. They took up golf and joined several golf groups, including the “Swingers” Friday Night golf group.

She and Ralph purchased the New Athens IGA store in 1977 and served as owner-operators for 17 years, happy to join the community and support local businesses. Dee joined the VFW Auxiliary and New Athens Womens’ Club, where she also became president and was instrumental in the fund-raising and planning for construction of both “Welcome to New Athens” structures on the edge of town. Dee was a member of St. Paul’s Lutheran Church in New Athens, and a dependable volunteer for their Ladies Club, where she could be relied on to produce 30 pounds of German Potato Salad for the annual New Athens Homecoming chicken dinner. Active in the Illinois chapter of the General Federation of Women’s Clubs, Dee loved attending district meetings.

An excellent seamstress Dee decided to learn English smocking when her first granddaughter was born and created dozens of smocked dresses for her granddaughters and smocked bonnets for every newborn family member.

A private memorial service is planned with Heil-Schuessler in New Athens, IL coordinating arrangements. Burial at Jefferson Barracks National Cemetery after stay-home orders are lifted, and a celebration of Dee’s life is planned “when it is safe to hug.”

Memorial contributions may be made to Family Hospice, Belleville, IL, or St. Paul’s Lutheran Church in New Athens, IL, or the Alzheimers Association.