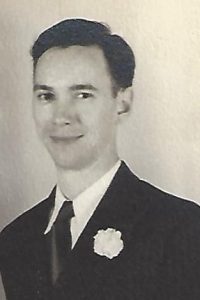 Irving George Schickedanz, 97 years, 1 month and 1 day of Marissa, IL was born on June 12, 1919 in his parent’s home in Marissa, IL. He passed away very peacefully after a full life on Wednesday, July 13, 2016 at Sparta Community Hospital.

A lifelong Marissa resident at the property inherited from his grandfather, he regularly told stories of living in “Old Town” and exhibited great pride in his hometown. One of his greatest accomplishments was that he married “the beautiful Ford dealer’s daughter,” as he was so fond of saying.

Irving lived by high Christian values that he continued to pass along to others. A lifelong member of Friedens United Church of Christ, he served for many years on the church council and worked tirelessly as an organizer for church construction projects. He was the “go-to” man for building and mechanical issues, and was recognized as the informal church and town historian.

A graduate of both Marissa Grade and Marissa High Schools, he joined the Civilian Conservation Corps and went on to build airplanes for Curtis Wright in St. Louis, MO during the early years of World War II. He was a member of the United States Navy where he was elected as the “Honor Man” of his military unit. After leaving the military, Irving worked for Triefenbach, Inc. as a Ford mechanic and later became the service manager for Sears, Roebuck & Co., in Belleville. Over a 30 year career, he was well known by many customers in the area for his care and kindness as an ambassador for Sears. Irv, as he was often called, was a proud member of the Marissa Volunteer Fire Department. He had the distinction of being the last village clerk of Old Marissa before the two communities merged. Irving also served on the Marissa Cemetery Board, the Marissa Township Board, and was a Scoutmaster for Troop 27. In 2012, Irving was the Parade Marshall of the Marissa Coal Festival as the oldest living World War II Veteran. Irving Schickedanz will be remembered as “A True Marissa Man”

He was preceded in death by his parents – Adam and Olea Amanda , nee Beimfohr, Schickedanz, and one sister – Helen (Chester) Jackson.

He is survived by his loving wife of 72 years – Mabel, nee Triefenbach, Schickedanz, whom he married on April 23, 1944, at Friedens United Church of Christ in Marissa, IL. They have two sons – David (Judith) Schickedanz of Brookline MA and John (Lea) Schickedanz Barrett of Marissa. Irv and Mabel have three grandchildren – Jody (Josh) Giuntoli of Olympia, WA, Stacey (David) Pilbean of Marissa, and Adam (Heather) Bennett Schickedanz of Los Angeles, CA. They have six great-grandchildren – Bruce, Zoe and Vincent Giuntoli, Maegan and Adisen Pilbean, and Aria Bennett Schickedanz. They have nephew Barry (Emily) Jackson of Sparta, IL, and additional nieces and nephews on Mabel’s side.

Memorials may be made to Friedens United Church of Christ in Marissa, IL.

Funeral Services will be held at Friedens United Church of Christ on Saturday, July 16, 2016 at 11am with Rev. Gail Geisel and Rev. Nancy Schubert officiating. Burial will be in Marissa Township Cemetery following the funeral service. Lunch will be provided at the church after the internment.