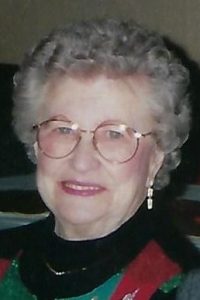 Mrs. Triefenbach was a homemaker. She was a member of Friedens United Church of Christ. She was an avid quilter and liked to play cards. Irene loved to play and never missed a chance to polka.

She was preceded in death by her parents – Jacob and Carrie, nee Fischer, Sinn. Her husband – Harpel Triefenbach whom she married on September 2, 1939 and who passed away on May 5, 2005. A daughter – Sharon Price. Two brothers – Elmer Sinn; Leonard Sinn. Two sisters – Ester Schubert; Aletha Erb

Memorials may be made to Friedens United Church of Christ or to the New Athens Home for the Aged.

Funeral: Services will be held at Heil-Schuessler Funeral Home in Marissa, IL on Saturday, January 28, 2017 at 12:00noon with Rev. Gail Geisel officiating.

Interment: Private burial will be held at a later date.