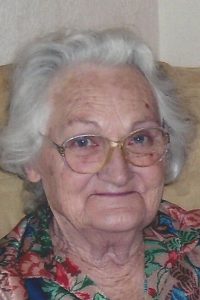 Irene worked at the New Athens shoe factory for several years before getting married to Willard L. Kunkelmann on October 25, 1947 in Freeburg, IL.. She continued to work at the factory while also being a housewife on the farm. Irene was an avid gardener; always planting and growing large and plentiful gardens. She loved all flowers and plants which she grew in abundance all around the farm and home inside and out. Irene was a member of St. John United Church of Christ in New Athens and the St. Clair County Farm Bureau.

Irene loved to cook, sew, embroider and crochet many, many doilies. Together with her husband they would go to many auctions and come home with some kind of shelf item, antique or special treasure that they enjoyed. Irene was a devoted caretaker of her husband during his long battles with numerous illnesses. Whether big or small, no problem or circumstance ever slowed her down. She loved her three grandchildren and 2 great grandsons dearly. Irene remained on the farm for many years after her husband’s passing and lived the past few years at the New Athens Home for the Aged in New Athens, IL. She will be sadly missed by her family and many friends.

She was preceded in death by her husband Willard Kunkelmann, who died on December 3, 1997, her parents; Charles and Caroline (Schwebel) Weideman, 2 half brothers; Herman and Henry Winter, and 2 half sisters; Sophie Emmerich and Margaret Erb.

Memorials in Irene’s honor may be made to the New Athens Home for the Aged activity fund.

Funeral: Services will be held at 10 a.m. on Wednesday, December 24, 2014 at Heil-Schuessler Funeral Home in New Athens, IL with Rev. Dr. Robert Koch officiating. Entombment will be at Valhalla Gardens of Memory Mausoleum in Belleville, IL.