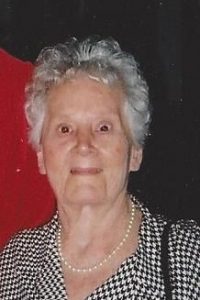 Mrs. Tadlock was a homemaker. She was a member of the First United Methodist Church of Marissa. Her most joyous times were spent with her family. She loved to travel especially with her family. Some of her travels included annual visits to the beaches of Florida, several trips to White River in Arkansas, Niagara Falls and the Grand Canyon. Helen loved to cook and feed everyone. In her younger years she worked in factories. She helped the war effort by making shells. Helen was a devoted wife and mother. She had a kind heart and a true kindred spirit. She will be greatly missed but will live on through the many lives she touched.

She was preceded in death by her parents – Alex and Marie, nee Benz, Besancenez. Her loving husband – Leslie D. Tadlock whom she married on June 8, 1944 in St. Louis, MO and who passed away on April 17, 2005. Three brothers – Bud Besancenez; Roy Besancenez; Harry Besancenez.

“Even though you cannot see the bird sing if you listen you can hear him with your heart.”

Memorials may be made to the First United Methodist Church of Marissa.

Funeral: Services will be held at Heil-Schuessler Funeral Home in Marissa, IL on Friday, January 30, 2015 at 11:00am with Rev. Rebecca Williams officiating.