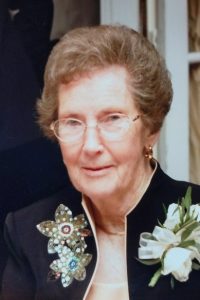 Helen Marie Hunter, the cherished matriarch of the Hunter family, passed away peacefully of natural causes at her home outside Marissa, IL on the 15th of November 2020. Kind and caring to all who knew her, Helen dedicated her adult life to the support and care for her loving family, all of whom were on hand to return that devotion during her final days.

She was preceded in death by her parents Ralph and Mae (nee Fulton) Hemphill, her husband Herschel (1925-2018) and son in law Richard Hacker (1947-2020). During 75 years of devoted marriage, she and Herschel raised their family in the best way they knew how, reflecting their values of hard work, perseverance, good humor, and ending the day with a hearty meal and tasty dessert.

Helen is survived by her five children, Roger (Kelly), Susan Grometer (Peter), Barbara Kniffin (Andy), Kathryn Hacker (Richard), Carol Green (Gary) as well as Henry Hurst who has been a part of the Hunter extended family for over 50 years. She was affectionately referred to as “Honey” by her 10 grandchildren and 17 great grandchildren, the name they called her when requesting her famous biscuits, pies, or apple crisp.

Helen was born on January 30, 1925 at her family farm. She was known in her earliest days as “Little Ralph” on account of the mischievous sense of humor she learned from her dad and cheerfully retained throughout her 95 years.

She was at her happiest sitting around a kitchen table with family or friends playing endless hands of Pinochle, her preferred outlet for a competitive spirit that earned her a reputation as a ruthless player with tricks as sharp as her wit. She was also an avid quilter, producing a personal quilt for each of her grandchildren on the occasion of their births and weddings.

A family graveside service was held at the Marissa Cemetery. The family asks that in lieu of flowers, donations be made to Tilden Presbyterian Church, where Helen was an active member of the congregation for more than 80 years.