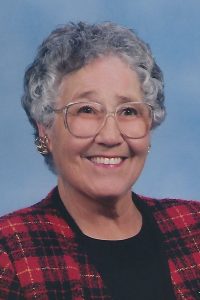 Mrs. Lewis and her husband owned and operated Lewis Hardware in Marissa from 1952 to the mid 1970’s. She also worked for many years as bookkeeper at the Sparta Airport. She was a member of the Marissa Presbyterian Church where she also taught Sunday School and was in the Evelyn Cathcart Circle. Helen was active and participated in the Marissa Women’s Club, Marissa Historical Society, and volunteered with Hospice. Helen loved reading and was very active with the Marissa Library and the Marissa Grade School reading program. She was a volunteer during WWII with the Red Cross and donated gallons of blood throughout her life. She enjoyed walking and belonged to the Scott Air Force Base Trekers. Helen was also an avid St. Louis Cardinals fan.

She was preceded in death by her parents – Monroe and Selina, nee Hudson, Wallace. Her husband – Clyde Lewis whom she married on June 28, 1941 in Jennings, MO. One brother in infancy and four sisters.

Funeral: Graveside memorial service will be held at the Marissa Township Cemetery on Saturday, April 14, 2018 at 1:00pm with Rev. Dr. Robert Koch officiating.

A memorial service will be held at a later date to be determined.