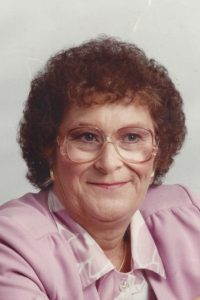 Hazel C. Muskopf, nee Dickerson, 90, of Marissa, IL, born August 17, 1924 in Carbon Hill, Ala, passed away Monday, October 13, 2014 at the Randolph County Care Center in Sparta, IL. She was a retired garment factory worker, a member of First United Methodist Church in Marissa, IL; the First United Methodist Women’s Club also in Marissa, IL and was a member of the International Ladies Garment Workers Union since 1958.

Hazel was preceded in death by her husband, Alfred William Muskopf whom she married on March 14, 1953 in Chester, IL and who died on December 4, 1984; and her parents; Edgar Bates Dickerson and Mary Etta (Turpin) Reinhardt.

In lieu of flowers, the family asks that memorials be made instead to the First United Methodist Church of Marissa, IL or to Hospice of Southern Illinois – Orange South.

Funeral: Services will be held at 11 a.m. on Friday, October 17, 2014 at Heil-Schuessler Funeral Home in Marissa, IL with Rev. Rebecca Williams officiating.

Heil-Schuessler Funeral Home in Marissa, IL is in charge of arrangements