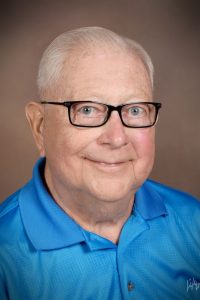 Joe went to St. Agatha’s Grade School in New Athens and graduated from Christian Brothers College Prep High School in St. Louis. He attended Quincy College before enlisting in the Air Force and serving tours in both Japan and Korea. After Korea, Joe went to work at Peabody Coal Company retiring from there in 1994. Joe was a member of St. Agatha Catholic Church. He was a 4th degree in the Knights of Columbus Council 1952 and a 3rd degree in St. Pius X Council 3789, serving as council treasurer for many years and devoting many hours to their weekly bingos. He was an active member of the Belleville Cursillo Organization. Joe was a long standing member of the United Mine Workers. He was a member of the New Athens Community School Board for 15 years. In retirement, Joe and Ann enjoyed traveling with their family. His faith and family were his two passions.

Funeral: Mass of Christian Burial will be held at St. Agatha Catholic Church in New Athens, IL on Wednesday, May 31, 2017 at 10:00am with Father James Nall officiating.