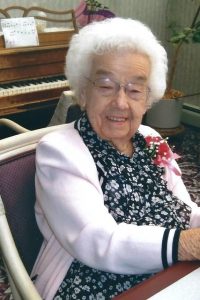 Geraldine was born in Lenzburg, Illinois on September 18th, 1921, the daughter of Erwin Groh and Frieda Prediger. At the age of 16, Geraldine lost her mother, and her father remarried Leota Dickson. Geraldine graduated from Marissa High School in 1939 and then went to work at the St. Clair County Courthouse in Belleville, Illinois. She was later employed at Scott Air Force Base near Belleville. On July 18th, 1942 she was united in marriage to Everett James Robinson at St. Peter’s church in Lenzburg, Illinois. Shortly after their marriage, Jim entered the United States Army and was deployed to the Pacific Theater in WWII.
Geraldine and Jim made their home in Lenzburg, surrounded by many family members and friends. One of her greatest joys was music. She was Church Organist and Choir Director at St. Peter’s Church for over 40 years. She also directed and sang in the RSVP Community Chorus which performed in area churches and in the community. She taught piano lessons in her home for many years. She enjoyed many years of traveling nationwide and overseas with her husband, Jim, as he held various offices with The Lions Club. Geraldine liked volunteering and being a homemaker. She loved doing daily crossword puzzles, reading, mowing her lawn, and cheering for the St. Louis Cardinals. She never missed sending birthday, anniversary, or get-well cards to family and friends. Several years after Jim’s passing, she moved to Iowa City to be near her son and family. Her family was her greatest joy, and she loved holidays with them, attending baptisms, graduations, recitals, and the weddings of her granddaughters. She also enjoyed attending church with her family at St. Andrew Presbyterian Church in Iowa City.

She was preceded in death by her husband, Jim, in 1992, her parents, and her brother, Leroy Groh who was killed in WWII.

In lieu of flowers, memorials may be directed to St. Peter’s United Church of Christ in Lenzburg, IL. Arrangements are being handled by Heil Schuessler Funeral Home in New Athens, Illinois.

Funeral; Services will be held at 10:30 a.m. on Wednesday, November 23rd, 2016 at St. Peter UCC Church in Lenzburg, IL with Rev. Robert Coffey officiating.
Heil-Schuessler Funeral Home in New Athens, IL is in charge of arrangements.