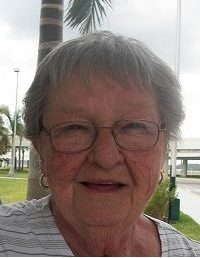 Mrs. Bochantin was a homemaker. She was a member of St. Agatha Catholic Church. Georgian helped prepare and serve many Knights of Columbus and other church dinners. She was an avid reader. Most of all she loved spending time with her grandchildren.

She was preceded in death by her parents – George and Sarah, nee Todd, Bathon. Her husband, Kenneth Bochantin whom she married on October 25, 1952 and who passed away on May 24, 2003. Also preceded by 1 daughter – Kathy Ruminer. 4 grandsons – Jerod Staub; Mathew Lynch; John Patton; James Patton. 1 son-in-law – Joseph Galle. 1 brother and 3 sisters.

Memorials may be made to the St. Agatha Parish.