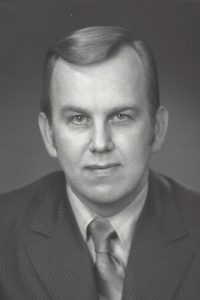 George H. Wirth, 90, of New Athens, Illinois was born August 18, 1923, in Belleville, IL and died Tuesday, June 24, 2014, at the New Athens Home for the Aged in New Athens, IL. He graduated from New Athens Community High School in 1941 and went on to receive a Bachelor’s of Science degree from the University of Illinois in 1948. From 1942 to 1945 he proudly and honorably served his country during WWII in the United States Navy attaining the rank of ensign. Mr. Wirth held certifications for pilot, navigator and also bombardier. By that time the war was winding down and he was never called upon for combat missions.

George was preceded in death by his parents, George P. and Ada Anna (Hessick) Wirth, Jr.

Surviving him are his wife Martha L. Wirth, nee Jelliffe of New Athens whom he married on July 22, 1950, in Springfield, IL; his 3 children: Steven P. Wirth of Ballwin MO, Laurie Wirth Melliand of Falls Church, VA and Eric C. Wirth of Kent, Ct.; and 1 granddaughter, Martina Melliand of Washington, D.C.

MEMORIALS: In lieu of flowers, memorials may be made to the New Athens Home for the Aged or to St. John United Church of Christ.

FUNERAL: A memorial service to celebrate George’s life will be held at 10 a.m. on Friday, August 22, 2014, at St. John United Church of Christ in New Athens, IL.