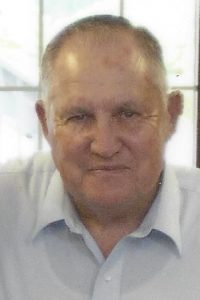 George C. Hayes, 86, of New Athens, IL; born December 5, 1926 in Qulin, MO, passed away on Wednesday, March 6, 2013 at his home with his loving family by his side. Mr. Hayes was a farmer and a member of St. John United Church of Christ in New Athens, IL. He also proudly and honorably served his country in the U.S. Army towards the end of WW2 and also during the Korean War. George belonged to several organization during his lifetime including the New Athens Lions Club; Masonic Lodge; St. Clair County Farm Bureau and served on the board of directors of the Lenzburg Farmers Co-Op. He was also a member of the Teamsters.

He is preceded in death by his parents Philip and Belvia, nee McIver, Hayes. His loving wife Virginia, nee Thomas, Hayes whom he married on May 11, 1946 in Poplar Bluff, MO and who passed away on December 13, 2011.

Funeral: Services will be held at St. John United Church of Christ in New Athens, IL on Monday, March 11, 2013 at 10:00am with Rev. Dr. Robert Koch officiating.