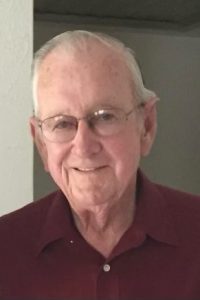 Gene served his Country in the United States Army during the Korean War.  He was a life member of the Steeleville American Legion.  Gene worked as a Head Pressman at Spartan Printing Company for over 40 years before retiring.  He was also a farmer, and he worked as a school bus driver after his retirement from Spartan Printing Company.  Gene enjoyed fishing and spending time with his grandkids.  He was a member of Zion Lutheran Church in Walsh, IL.

Gene was preceded in death by his wife – Maedell (Eggemeyer) Diskey who went to be with the Lord on February 18, 2020; parents – Harold and Clara (Clesse) Diskey; sister – Fern Frazer; brother-in-law – Harry Frazer.

Memorial contributions may be made to Zion Cemetery Fund or Zion Lutheran Church.