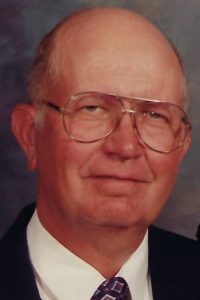 Gene Weaver, 75, of New Athens, IL was called to his heavenly home by Our Lord and Savior Jesus Christ on Thursday, October 3, 2019. He passed peaceably at home, with the family dog April at his side, having succumbed to the complications of congestive heart failure, which he suffered from for the last 5 years.

At St. Mark’s Lutheran Church, Steeleville, IL on March 29, 1964, God blessed Gene with a faithful and loving wife, Mabel G. Weaver of Steeleville, IL, who proceeded him to heaven on January 20, 2019. For over 54 years our Lord blessed and guided Gene and Mabel as husband and wife through the joys and thanksgiving, trials and tribulations of life. God granted Gene the strength to care for Mabel during her 4-year health struggles as she was able to remain at home. For this, we are eternally thankful. They are now reunited, free of their earthly pains and sorrows. We are sure there will be a few discussions, though, about Gene’s one pot meals over those four years.

As at St. Mark’s, Gene was a faithful member of St. Paul’s Lutheran Church, New Athens, IL since 1976. He serviced on the church counsel and assisted with other activities. Gene was a loving provider for his wife and family. He supported his children in their school activities, as chauffer and attendee, at music lessons, band concerts, sporting events, and FFA/4H meeting and events. Gene served on the New Athens FFA Advisory Council over the years. In his later years, he supported his grandchildren as a baby watcher, not sitter, and with “critters” for 4H and FFA fairs and shows. Gene enjoyed raising his “critters”, mostly feathered, over his entire life. He was a monthly participant at the Midwest Bird & Animal Breeders Assoc. Swap Meet, Waterloo, IL. As with his gardening, his motto was generally quantity over quality. This also applied to grocery shopping, where a good deal could only be better with more than was needed.  And who can forget the chicken sexters, handed out freely with instructions. Gene always had a large supply of cookies and ice pops for the great and grandchildren to enjoy. He usually had a story or two, uninterrupted and repeated of course, to tell. He liked to give out cooking advice, even though I don’t think he made a single meal. Gene was a retired Bindery worker for World Colored Press/Spartan Printing, Sparta, IL and worked in the meat department at Walmart, Waterloo, IL.