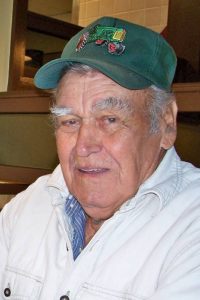 Frederick Dwight Rednour, originally from Sparta, IL, passed away January 7, 2022, peacefully in his home in Lompoc, California where he lived for the past 61 years.

He was born on March 6, 1929, at home in Sparta, Illinois to Fredrick Lee Rednour of Steeleville, Illinois and Gladys Sarah (nee Rainey) Rednour of Walsh, Illinois.

Fred was preceded in death by his parents and his sisters Evelyn Rednour, Mildred Miller and Blair Rainey (aka Juanita Rednour). He is survived by his younger sister, Patricia Childers (Randy) of Colp, Illinois, his son, Jim Rednour of Morton Illinois and daughter, Rona Rednour (Jay Blacksher) of Aztec, New Mexico.

He left the family farm in Illinois at the age of 17 to enlist in the Navy. Then he transferred to the Army and went to Japan. A year after completing his service he was called back to serve in the Korean War as a Paratrooper Recon Scout. He was part of the 187th Airborne Regimental Combat Team known as the “Rakkasans”.

Fred made many life-long friends while he was employed by General Telephone for 40 years, working as a lineman, cable splicer, then an installer and repairman. He was a gentle, loving and giving man who lived a simple life. He was an avid deer and boar hunter and enjoyed white river rafting and panning for gold well into his 70’s. More amazing was that he was 92 years old before he stopped riding his bicycle around Lompoc only months before he passed away due to complications with his breathing. He was blessed to very good neighbors who shared their love, kindness and families with him over the years.

In keeping with Fred’s request, a private family graveside service will be observed.

Heil-Schuessler & Sinn Funeral Home of Sparta Illinois has assisted the family with arrangements.