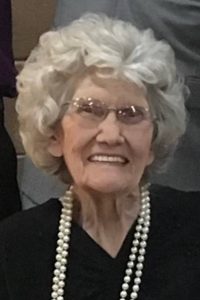 Frances was born on May 26, 1930 in Oxford, Mississippi to the late Fulton and Margaret (Wells) Ayles.   After graduating high school she attended Charity Hospital School of Nursing in New Orleans, Louisiana, graduating in 1952 as a registered nurse.  Frances worked in Intensive Care Units in hospitals in New Orleans and in Memphis, Tennessee.

She married Melvin Mark Ekes on April 25, 1952, in New Orleans, Louisiana. He preceded her in death.

She was also preceded in death by her parents. Siblings – Martha Denton, Robert Ayles, Thomas Ayles, Harry Ayles all of Oxford, Mississippi. Stepson – Walter Mark Ekes and his wife, Patricia of Columbus, Ga.

After moving to Sparta, Frances accepted a nursing position at Randolph County Care Center where she worked for more than 25 years until she retired.

Frances was a devoted wife, mother, and grandmother. She cared deeply for her extended family, friends, neighbors, and her church.   Her family and friends will always remember her as being “such a kind and special lady”.

Memorial Contributions may be made to New Palestine Methodist Church or the Human Service Center in Red Bud, IL.