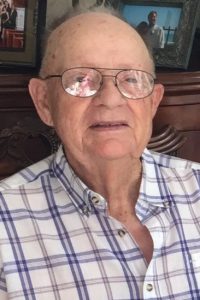 Turk was a veteran of the United States Navy Seebees serving during World War II.  After the war, he worked for the Brown Shoe Factory, and retired from Zeigler Coal Mine.  He was a member of the U.M.W.A. and a lifetime member of the Percy American Legion.

An avid fisherman and hunter, Turk, enjoyed reminiscing about his ‘big catches’.  He was a charismatic jokester, who loved a good laugh and conversation.  Turk often left one wondering if he just pulled one over on them.

In retirement, Turk could be found ‘picking’ at auctions and flea markets, where he bought everything from toasters to knives to cars.  He often ‘fixed-up’ these items and sold them out of his truck at local watering holes.

A private graveside interment was held on Friday, July 5.