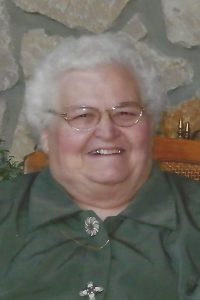 Ethel was a cook with the New Athens School District for 30 years. She was a member of St. John United Church of Christ, Women’s Guild and Columbia American Legion Auxiliary.

She was preceded in death by her parents – Adolph and Bertha, nee Gruenewald, Gummersheimer. One son – Bryan Buettner.

In lieu of flowers, memorials may be made to the family, New Athens Fire Dept or New Athens Ambulance Service.

Interment: Burial will be held at Mount Evergreen Cemetery in Millstadt, IL.