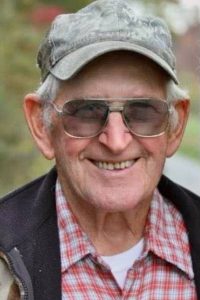 Elmer Ray Theobald, 91, of Baldwin, IL; born on May 26, 1931 in Preston, IL the son of Adam and Clara Schaffer-Theobald; passed away on Wednesday, November 30, 2022 in Steeleville, IL surrounded by his loving family.

Elmer had a zest for life that was contagious, with always a smile on his face and his “happy to be alive” attitude.  He was a joy to be around.  Elmer served in the United States Army as a Medic during the Korean War earning a variety of medals and ribbons such as the Korean Service Ribbon with 2 Bronze Service Stars, United Nations Service Medal, National Defense Service Medal, and One Overseas Bar.  He was very proud of serving his Country and earning the title of Corporal before being honorably discharged.  Family was always his biggest passion his entire life.  This was followed closely by hunting and fishing, earning him the title of “The Crappie Man” by those that knew him.  This passion was also instilled in his sons to pass down through generations.  He always reminded his children to do the right thing no matter the task.  He married the love of his life, Marylou Hardie on August 11, 1956 and she preceded him in death on February 24, 2003.

Memorial contributions may be made to Maple Creek Hospice.