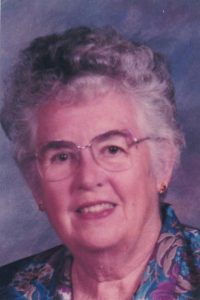 On February 23, 2022, Elizabeth Dorris Deppe passed away peacefully at the age of 93.  She was born September 6, 1928 to Oscar Matthew and Mabel (nee Dorris) Preston.

Elizabeth married Russell Deppe and together they had five children.  She was a devoted mother to Diane (Paul) Copeland of Kewanee, Debbie (Kenny) Baird of Sparta, Dennis of Oviedo, FL, Brenda (Larry) Stork of Sparta and Marilyn (Dale) Clasen of Edwardsville.  Elizabeth leaves behind many grandchildren and great grandchildren who will miss her dearly.  She is survived by sisters, Mary Ella Deppe, Patricia Gutjahr and Donna McBride. Also, special friend and sister-in-law, Beulah Cairns.  To know her was to love her.

She was preceded in death by her parents, husband, daughter – Marilyn and sister – Anna Marie Spinney.

Memorial contributions may be made to Shriner’s Hospital for Children.

A private graveside service will be held at Caledonia Cemetery.

Heil-Schuessler & Sinn Funeral Home in Sparta, IL is assisting the family with arrangements.