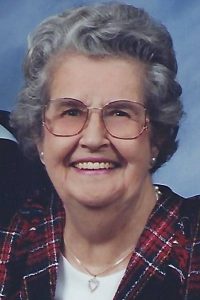 Mrs. Jones was a retired licensed insurance broker for the State of Illinois.  She worked for the Church and Hamilton Insurance Agency.  That agency later became the Vogel Insurance Agency and then Cherry Insurance Agency.  Elda was a long time member of the First Baptist Church of Marissa, joining in her early teens.  She served in the church on several committees and held many positions.  Elda also did extensive research with her family genealogy and history.  She was a member of the Marissa Historical and Genealogical Society for many years.  In 2017 Elda was named Marissa’s Most Valuable Person.

She was preceded in death by her parents – George and Stella, nee Tolbert, McCormick.  Her husband – James “Jimmy” Jones whom she married on January 22, 1949 and who passed away on June 14, 2002.  Two brothers – James and Edgar Faye.  One sister in infancy – Myrtle Mae.  One cousin – Orville Tolbert.  One grandson – Christopher Cahoon.

Memorials may be made to the First Baptist Church of Marissa or to the Marissa Historical and Genealogical Society.

Funeral: Services will be held at Heil-Schuessler Funeral Home in Marissa, IL on Wednesday, July 18, 2018 at 11:00am with Rev. James Harkness officiating.