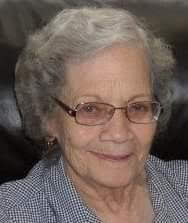 Mrs. Franklin was a homemaker.  She was a member of the First Baptist Church of Tilden.  She was the first president of the Tilden Public Library.  She served on the board of directors of the WMU.  Edna liked working on genealogy.  She also liked quilting, canning jam, cooking and collecting recipe books.  Edna also loved listening to country and gospel music.

She was preceded in death by her parents – Edwin and Blanche, nee Harrison, Alexander.  Her husband Rev. Wilbur “Web” Franklin Sr. whom she married on May 11, 1951 in Paragould, AR and who passed away on April 15, 2018.  She was also preceded in death by four brothers and six sisters and one niece.

Memorials may be made to Alzheimer’s Association, Tilden Teen Sunday School Class or the First Baptist Church in Tilden, IL.

Funeral: Services will be held at the First Baptist Church in Tilden, IL on Tuesday, June 23, 2020 at 11:00am with Rev. Paul Hahn officiating.

Heil-Schuessler & Sinn Funeral Home in Tilden, IL is in charge of arrangements.