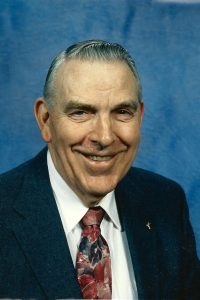 Colonel (Ret.) Earl Wesley Reynolds, 91, passed into the next life on Christmas Eve, 2012, while residing at Dammert Geriatric Center at the Shrine of Our Lady of the Snows. He was born in Norwich, VT, on March 6, 1921, the son of Wilbur and Ormacinda (Edmands) Reynolds. Earl was the husband of Anne Virginia (McDermott) Reynolds and the father of Mary Anne Shaw, Patricia Evelyn Reynolds, and Earl Wesley Reynolds, Jr.

Earl had 43 years of public service with the US Air Force. He enlisted in the Army Air Corps at Rutland, VT, on 12/18/41 and received pilot training as an aviation cadet at bases in FL, AL, and MS, graduating as a 2nd Lieutenant on 7/26/42. He became a B-17 pilot and served in flying ops and training positions for 2 years in NE, KS, SD, and TX. On 8/25/43, he married Anne Virginia McDermott of Denver, CO. In the fall of 1944, Earl was assigned as pilot of a new model B-17 to England, flying combat missions with the 493rd Bomb Group of the Eighth Air Force until the end of the war in 1945. Earl returned to civilian status in 1947 and began college at Dartmouth, and graduated class of ’51. While at Dartmouth, daughters Mary Anne and Patricia Evelyn came along. Earl was recalled to active duty 7/51. Family relocated to the Azores for 4 years. Earl served as Base Inspector and piloted DC-4s. In 1955, Earl went to Kelly AFB, San Antonio, as Squadron Operations Officer and Flight Commander of 12 C-54 crews, plus Aircraft Commander on transport flights to AF bases in Europe, Africa, and Panama. Earl earned a Master’s Degree in Business Administration from the AF Institute of Technology at Wright Patterson AFB, Dayton, Ohio, in 1957. In 1958 Earl became Director of Management Analysis at HQ Air Weather Service, Scott AFB, Belleville, IL. Family relocated to Marissa, IL. In 1960, Earl and family went to Ankara, Turkey, HQ TUSLOG, as Director of Management Analysis. The family traveled as far north as Copenhagen, Denmark, and as far south as Petra, Jordan. They spent Christmas Eve of 1961 in Bethlehem at Shepherd’s Field. In 1962, Earl was assigned to ROTC at St. Louis University, and the family moved home to Marissa, and Earl Jr. was born at Scott AFB. Earl was promoted to Lt. Colonel, and was an Associate Professor of Air Science at St. Louis U. Earl received an award for Commendable Service. On 10/31/66 Earl, as a Command Pilot with over 5,000 hours was retired from the USAF as a Colonel. In 1967 Earl resumed his career in the Federal Service as a civilian employee at Scott AFB. In the early 70s, Earl was Director of Management Analysis for Military Airlift Command and in 1978, he became Director of Management Analysis for the AF Communications Command. Earl retired in 1984, and was then awarded the Outstanding Civilian Career Service Award. For the next 20 years, Earl and Anne traveled frequently, spending time with family and church. They enjoyed an active retirement, living in their house at 205 N. Borders in Marissa, IL, for 50 years.

Earl led a long life of service to his God, his country, and his fellow man. In addition to his distinguished military career, Earl was an elder in the Presbyterian Church for more than 40 years. He served as Wagonmaster of the Land O’ Lincoln Winnies for more than a decade, President of the Lewis & Clark Chapter of the Illinois Society of the Sons of the American Revolution, was a loyal supporter and/or member of more groups than we can remember, including the Marissa Rotary Club, the Marissa American Legion, the Veterans of Foreign Wars, the Eighth Air Force Historical Society, the Military Officers’ Association, the Dartmouth Alumni Association, and President of the Macke Senior Center in Marissa.

Earl was an avid outdoorsman, loving to fish and hunt. When he was no longer able to walk the streams and woods, he spent his time cultivating his yard and garden at home in Marissa, and cutting wood with his grandsons.

In 2008, Anne and Earl moved into Cedar Trails Senior Living Community in Freeburg, IL. In 2010, they moved into the Dammert Geriatric Center at the Shrine of Our Lady of the Snows in Belleville, IL.

Earl was preceded in death on October 7, 2010, by Anne, his wife of 67 years, his three siblings Maurice, Jack, and Alice, and his great-granddaughter Sophia Evelyn Reynolds. Earl is survived by his two daughters Mary and Patty, his son Wes (wife Melissa), his 15 grandchildren, and his 12 great-grandchildren.

Memorials may be made to The Shrine of Our Lady of the Snows; Passages Hospice; Marissa Presbyterian Church or American Legion Robert F. Arnold Post #172.