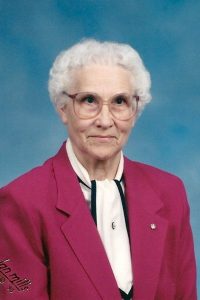 Having attended the public school system in Marissa, IL, she earned a Bachelors of Science in Education from Southern Illinois University Carbondale. For almost thirty years she was known and respected as Miss Fox to her many students and their families at Marissa Elementary School. During her teaching years, among her many pupils were the four children of the man she was to eventually marry.

Throughout the first fifty years of her life, Aunt Dorothy was cherished by her many nieces and nephews for the love and support she showed through multiple roles, including second mother, teacher, mentor, game player, cook, baker of pies, kitchen supervisor, and holiday enhancer. In 1970 she added the important new roles of wife and step-mother.

On January 2, 1970, she was united in marriage to Ed Diehl of Marissa, Illinois. They celebrated 19 plus years of marriage before his passing. Sharing a life-long love of music, they spent many hours sharing their talents with others, Dorothy at the piano, accompanying Ed’s beautiful bass voice.

Dorothy was an active, long-time member of the Marissa Presbyterian Church and had been a member of the Progressive Grange (New Athens). She was a teacher for the Marisa Public School System for many years and continued teaching those unable to read until her placement in the nursing home. She also worked at the Sonshine Corner in Marissa for many years.

Nieces and Nephews: Rita (Spence) Pavolka of Bloomington, IN, Donald Lee Spence of Mishawaka, IN, Steven A. Spence of Indianapolis, IN, and their sixteen children and grandchildren; Carole (Fox) Howell of Taylorville, IL, Richard Robert Fox of Glen Carbon, IL, Diane (Fox) Rathnow of Knoxville, TN, and Jim R Fox of Omaha, NB, and their thirty children, grandchildren and great grandchildren. In addition Dorothy is survived by her fifteen cousins.

Funeral: Services will be held at Marissa Presbyterian Church in Marissa, IL on Wednesday, December 28, 2011 at 11:00am with Rev. James Stark officiating.

Memorials: Memorials may be made to Marissa Presbyterian Church or the American Alzheimer’s Association.

Heil-Schuessler Funeral Homes in Marissa, IL is in charge of arrangements.