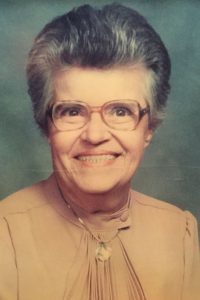 Mrs. Favre was a caregiver and support person for many elderly Marissa residents and was a member of the Marissa Presbyterian Church.

She was preceded in death by her parents, Keith and Helen (nee Eisner) Henderson and her husband Clement Favre.

Mrs. Favre traveled extensively with her family due to her husband’s work assignments, living briefly in Canada, Cuba, and several U. S. states.

She arrived in Marissa in 1954 where she settled into what became her permanent residence. She took great pride in the upkeep of her Victorian home and enjoyed spending time working outdoors in her yard.

She was an avid Cardinal baseball fan with an extensive ceramic cardinal collection, and also had a large collection of teddy bears. She followed her favorite drivers in NASCAR.

She loved dogs and over the years had several that she truly pampered.

She was an avid reader and well known patron of the Marissa Public Library.

Memorials may be made to St. Jude’s Children’s Hospital in Memphis, TN or the Marissa Public Library.

Service: A celebration of Dorothy’s life will be held at Heil-Schuessler Funeral Home in Marissa, IL on Friday, November 24, 2017 at 12:00noon with Rev. Dr. Donald Wagner officiating.