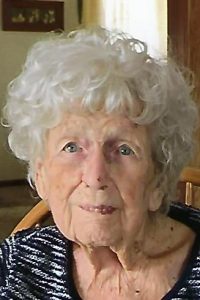 Dorothy was born February 4, 1926 in Sandridge, Illinois to William and Ethel (Redden) Hewitt. She married the love of her life, Kenneth “Bun” Bartley on June 8, 1946 at the First United Methodist Church in Marissa, Illinois. Bun preceded her in death on January 16, 1990. She was also preceded in death by her parents, six brothers, and one sister.

Dorothy was a homemaker and had worked at several jobs in the local area. She was very talented in crocheting and embroidering and still enjoyed making items for family members until recently. She was a member of the Tilden United Methodist Church in Tilden, IL.

Heil-Schuessler Funeral Home in Marissa, IL is in charge of arrangements. A private family graveside service will be observed. Internment will be in the Coulterville Cemetery.

In lieu of flowers, memorials may be made to the Coulterville Cemetery.