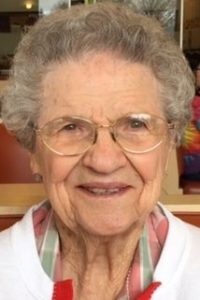 Doris Jean was a faithful member of First United Methodist Church of Marissa. She has served on the board for many years and held many jobs in the church. She was a member of United Methodist Women, Martha Circle, Adult Bible Class. She was a past member of the Marissa Recreational Area and Ladies Golf League. She was the first lady to make a hole in one on the course. She was active in Tilden Methodist Church before coming to Marissa. She spent many hours tending to the sick and elderly at nursing homes as long as her health held out. She was employed at George Brazelton’s Pharmacy and the Sparta Hospital for many years. She retired after three years with Peabody Coal Company.

She was preceded in death by her parents – John and Myrtle, nee Clayton, Bartley. Her first husband – Norman D. Harriman whom she married on June 29, 1945 in Fullerton, CA and who passed away on March 11, 1975. Her second husband – Felix Rhein whom she married on August 20, 1978 in Marissa, IL and who passed away on February 17, 2009. One step-son – Tom Rhein. One step-great grandson – Chaffin Whitaker. Also preceded in death by six brothers and four sisters.

Funeral: Services will be held at the First United Methodist Church in Marissa, IL on Friday, March 31, 2017 at 12:00noon with Rev. Philip Gardner officiating.