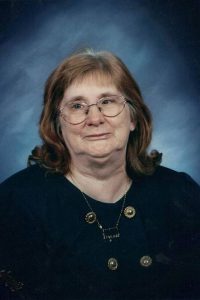 Donna liked to play Bingo and read.  She loved visiting with her family, especially her grandchildren.  Another person she enjoyed spending time with was her good friend, Sharon Hill.  Rhonda Mahan is also a good friend that was always there for Donna whenever she needed help getting to any appointments.

She was preceded in death by her parents – Lacey and Pauline (Bergfield) Ferguson; daughter – Kathy Hoskin; brother – Garland Ferguson.