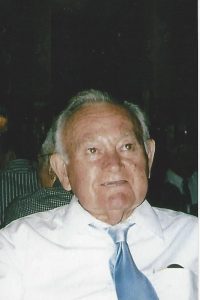 Dean G. Andres, 88, of New Athens, IL, born June 23, 1927 in Mascoutah, IL, passed away on Wednesday, August 19, 2015 at Memorial Hospital in Belleville, IL. He honorably served his country in the US Navy at the latter part of WW2. Dean retired from the U.S. Postal Service after being a letter carrier for 30 years. As a child, Dean spent time at the clubhouse on the Kaskaskia River with his parents and brother, Vernon. Upon his father’s passing, he became the owner of the clubhouse grounds. The clubhouses brought him a lifetime of joy and pride. But above all, he will always be remembered as a loving and devoted husband, father, grandfather, great-grandfather, brother, brother-in-law and uncle.

Mr. Andres was preceded in death by his parents, George and Aurelia, nee Weiss, Andres, his step-mother, Viola Andres and a daughter, Kathy “Susie” Andres. Also preceded by sister and brother-in-law, Stella and Ray Telford, brother and sister-in-law Clarence and Peggy Martin, and brother-in-law James Farrell.

In lieu of flowers, the family has asked that memorials be made to Heartland Hospice, 333 Salem Place, Suite 150, Fairview Heights, IL 62208.

Funeral: Services will be held at 12 p.m. on Monday, August 24, 2015 at Heil-Schuessler Funeral Home in New Athens,IL with Rev. John Lukomski officiating. Burial will be at Oakridge Cemetery in New Athens, IL.