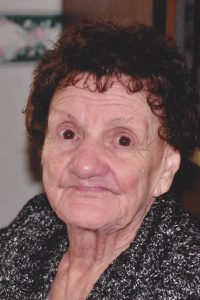 Colleen Mae, nee Voelkel, Bogusch, 80, of Lenzburg, IL; born February 8, 1934 in Belleville, IL; passed away on February 28, 2014 at the New Athens Home for the Aged in New Athens, IL. Colleen had worked at the Shoe Factory in Freeburg, Ill., was a bar maid at several places in New Athens, Marissa and Lenzburg, Ill. throughout her years, She has been living in the New Athens Home for The Aged since October 2011 where she met with old and new friends, enjoyed Bingo, Crafting and good times with her visitors. She will be remembered for her gift of giving to others, tasty homemade pies, soup and the best chicken & dumplings, her sense of humor and the love and special times shared with her family and friends.

She is preceded in death by her parents – Rudolph and Ida, nee Hildebrandt, Voelkel. Her husband – Wesley Bogusch who she married on July 7, 1956 in Lenzburg, IL and who passed away on September 7, 1998.

Funeral: Services will be held at Heil-Schuessler Funeral Home in New Athens, IL on Wednesday, March 5, 2014 at 10:00 a.m. with Rev. John Lukomski officiating.

Interment: Burial will be held at Lakeview Memorials Gardens in Fairview Heights, IL.