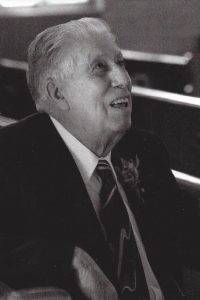 Cletus was involved in many businesses during his working career. He was a hard worker all of his life and started working at the age of 7. One of his earliest jobs was delivering milk in New Athens. He was the owner and operator of New Athens Ready Mix and Cletus Lischer Trucking. He was a partner in Coal Transport; Quality Sand; Quality Stone; Illinois Excavators; LMK Leasing and Roger’s Ready Mix. He was a member of St. Johns United Church of Christ. Cletus was a World War II Army Air Force Veteran. He was a charter member of the New Athens Lions Club. He was a member of American Legion Post 565; VFW Post 7710; Freeburg Masonic Lodge 418; Freeburg Order of Eastern Star #542; York Rite; Knights Templar; Scottish Rite; Ainad Shiners; New Athens Sportsmen Club.

He was preceded in death by his parents Alvin and Augusta, nee Schmelzel, Lischer. His beloved wife Lucille, nee Frantz, Lischer whom he married on November 2, 1940 in Perryville, MO and who passed away on April 1, 2004. 2 brothers – Virgil Lischer; Elmer Lischer. 2 sisters – Dorothy Hodapp; May Hawthorne.

Memorials may be made to the Shriners Children’s Hospital; New Athens Lions Club or St. John United Church of Christ.

Funeral: Services will be held St. John United Church of Christ in New Athens, IL on Wednesday, September 12, 2012 at 11:00am with Rev. Dr. Robert Koch officiating.

Burial: Interment will be held in Oakridge Cemetery in New Athens, IL.