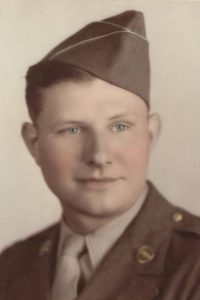 Calvin W. H. Fruth, 97, of Marissa, IL, born March 19, 1925, in Lively Grove TWP, IL to the late Andrew W. and Olga J. Fruth, nee Petri, passed away on November 3, 2022, at his residence. Calvin was a WWII Army veteran, trained as an Amphibious tank commander and served in the Pacific theater in 1945-1946. After returning home, he exercised his entrepreneurial spirit by starting and running many businesses including Cal’s Gift Shop, Cal’s Produce, the Fruth Family Farm, and a carnival business employing many young people from the Marissa area. He was the head of the Marissa School Board for a time, organizing many events for children during his tenure. He was also a member of the Marissa American Legion for over 70 years and the Local 520 Operating Engineers for over 40 years. Cal enjoyed traveling, hunting, fishing, keeping a garden, canning the produce that came from said garden, as well as making his own summer sausage while spending time with his family and close friends.

He was preceded in death by his parents; his loving wife of 71 years, Delow Fruth, nee Wallace, whom he married on May 30, 1945, at Fort Knox, KY, and who passed away on June 16, 2016; two daughters, Lois Waeltz and Linda Petot; and brother, Clyde Fruth.

Calvin is survived by his son, Craig Fruth of Marissa, IL; three grandchildren, Benjamin (Jessica) Petot of Trenton, IL, Jacob and Zachary Fruth of Seattle, WA; and sister-in-law, Alice Waeltz of Belleville, IL; and dear friend, Richard Steele, as well as many nieces, nephews, and cousins.

In lieu of flowers, memorials may be made to the Trinity United Church of Christ Cemetery fund in Biddleborn, IL.

Visitation: Friends and family will be gathering from 10 a.m. until1 p.m. on Saturday November 12, 2022, at Trinity United Church of Christ in Biddleborn, IL.

Funeral: Services will be held at 1 p.m. on Saturday November 12, 2022, at Trinity United Church of Christ in Biddleborn, IL with Darryl Roosevelt officiating.