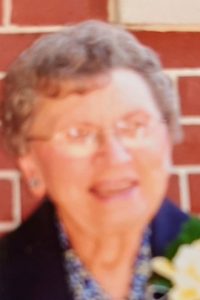 Blanche Lucinda Julia, nee Reuss, Schmierbach, 97, of Marissa, IL, born November 28, 1923 in Johannesburg TWP, IL, passed away on Thursday January 21, 2021 at her home. She was a homemaker and a member of Friedens United Church of Christ in Marissa, IL.

Mrs. Schmierbach was preceded in death by her parents; Conrad and Jenny “Pearl” (Frieman) Reuss, her husband; Milton Peter Schmierbach, whom she married in St. Clair County on April 29,1944, and who passed away on October 30, 2020 and two sisters; Arvilla Lehman and LaJune Fulton.

Memorials: May be made to Friedens United Church of Christ in Marissa, IL or Heartland Hospice in Fairview Heights, IL.

Funeral: Graveside services will be observed at 11 a.m. on Tuesday January 26, 2021 at Marissa TWP Cemetery in Marissa, IL