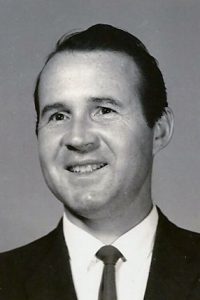 Billy Barnes Denison, 86, of Venedy, IL; born October 30, 1926 in Waco, TX; passed away on Thursday, April 4, 2013 at Memorial Hospital in Belleville, IL.
Mr. Denison was a teacher. He taught History, Spanish and German at the Sunnydale Academy in Centraila, MO. He a member of the Seventh Day Adventist Church and he attended Trinity United Church of Christ in Biddleborn ,IL.
He is preceded in death by his parents Ethelbert and Freddie, nee Barnes, Denison. His wife Iris, nee Farrell, Denison whom he married on August 4, 1952 in San Antonio, TX and who passed away on August 25, 2006. 2 sisters and 1 grandson – Joshua Savinsky.
He is survived by his children – Virginia (Dale) Wojtkowski of Venedy, IL; Farrell (Pete) Rouse of Kansas City, MO; Judy (Billy) Fiscus of Texas; Frederick Denison of Waco, TX. His grandchildren – Autumn (Kenny) Crabtree; Czessie Wojtkowski. His great-granddaughter – Lucy Grace.

In lieu of flowers, memorials in his name may be made to Hospice of Southern Illinois or Trinity United Church of Christ.

Funeral: A graveside service will be held at Trinity United Church of Christ Cemetery in Biddleborn, IL of Thursday, April 11, 2013 at 11:00am.