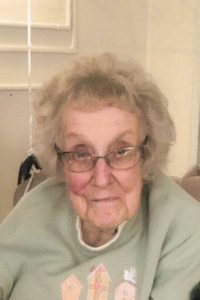 She was a member of the Sparta Hospital Auxiliary and the First United Methodist Church in Sparta.  Bette would help prepare meals at the church when they had funerals.  She also volunteered at blood drives held by the American Red Cross, whether it was preparing food or signing people in.  Bette was a giving and caring person with a huge heart and would be kind no matter who you were.  She kept in contact with people in town that were not able to drive, and she would offer them rides to haircuts, grocery stores, or anywhere when someone was in need.

Bette was preceded in death by her husband, Merle Bush and her parents.

Memorial contributions may be made to Shriner’s Hopsital for Children or the Randolph County Care Center.

The visitation for Mrs. Bush will be held on Saturday, April 23, 2022 at Heil-Schuessler & Sinn Funeral Home in Sparta, IL from 9:00 to 11:00 a.m.  Funeral services will begin at 11:00 a.m. with Pastor Randy McGeehon officiating.  Interment will take place at Caledonia Cemetery in Sparta, IL.