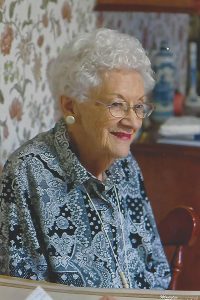 In lieu of flowers, donations may be made to the New Athens Home for the Aged.

Funeral: Services will be held at 11 a.m. on Thursday, March 30, 2017 at St. John United Church of Christ in New Athens with Rev. Dr. Robert Koch officiating. Following the services, she will be laid to rest next to her husband in Oakridge Cemetery in New Athens.