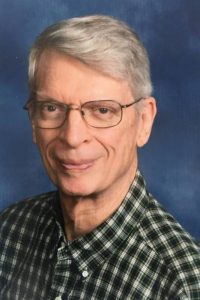 Chester Barry Jackson, Jr. of Sparta, IL, born August 25, 1944 in Marissa, IL, passed away on October 23, 2021 at the home of his son – Robert Jackson in Minneapolis, MN. He was a certified physical therapist who had worked at several area hospitals including; Sparta, Red Bud, Chester, Pinckneyville and Centralia and also with several home healthcare agencies in the southwest Illinois region.

He was preceded in death by his parents – Chester Barry and Helen (Schickedanz) Jackson and his beloved wife – Emily Jane (Hogwood) Jackson, whom he married on August 27, 1966 in Columbia, TN, and who preceded him in death on June 5, 2017.

In keeping with Mr. Jackson’s wishes, cremation was held.

Visitation: Public visiting hours are from 1 to 3 p.m. on Saturday December 11, 2021 at Heil-Schuessler Funeral Home in Marissa, IL.