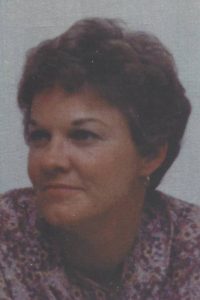 Alyce Jean Griffin, 82, was born in Sparta, IL to Carol Blair and J.T. Downs on December 7, 1937; passed away on Saturday, December 5, 2020.  Alyce Spent her childhood in Sparta, IL amongst her loving relatives and friends.  Prior to graduating from high school, her family moved to Chicago, IL.

Seven years later, her family moved to the Los Angeles area of California.  Alyce met and married Clinton Crout and they had two children, Lois Ellen and Gary Ross.  She was divorced in 1959.  She met Robert and they married in Las Vegas, NV on November 13, 1959.  Bob Griffin was in the Army and stationed in Fort Campbell, KY.  Charles Edward Griffin was born in Fort Campbell, KY on February 16, 1961.  The Griffins moved to California in March 1963 where Alyce began raising her children.  She persevered over the rough times of family life due to her loving husbands’ stressful occupation.  After raising her children to adulthood, she decided to do rug hooking and making fancy candy for holidays and sales.

Alyce’s only regret was that she never got to write a book that she had dreamed about.  Alyce and Bob were married for 61 years as of November 13, 2020.

She was preceded in death by her parents – J.T. and Carol (Blair) Downs; Daughter – Lois Ellen; Son – Charles Edward Griffin.

Interment: Her wishes were to be buried in Sparta, IL where she had wonderful friends and relatives. She will be interred at Union Cemetery in Sparta, IL on Friday, February 5, 2021 at 10:00 a.m. with her son, Charles.  Friends and family are asked to meet directly at the cemetery.