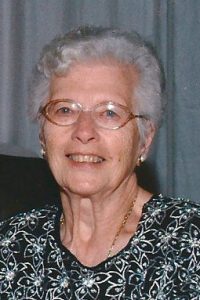 Mrs. Weilmuenster was a homemaker and a very devoted mother, grandmother, great-grandmother, and great-great-grandmother. She was a member of Friedens United Church of Christ and volunteered at the Sonshine Corner . She enjoyed spending many hours at the Marissa Senior Citizens Center and was an avid card and bingo player.

She is preceded in death by her parents George and Lena, nee Erb, Pflasterer. Her husband Levi Weilmuenster whom she married on July 18, 1943 and who passed away on October 4, 2006. One brother – Clarence Pflasterer. One sister – Florence Sauerwein.

Funeral: Services will be held at the Heil-Schuessler Funeral Home in Marissa, IL on Monday, July 2, 2012 at 10:00am with Rev. Gail Geisel officiating.

Memorials: In lieu of flowers, memorials may be made to Friedens United Church of Christ or to the Marissa Senior Citizens Center.