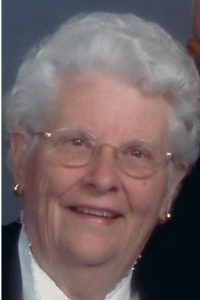 She was preceded in death by her parents August and Lenora, nee Schmelzel, Maurer, her 1st husband; Albert Parker, who passed away on October 8, 1973, 1 son in infancy; Mark Parker, and her brother and sister-in-law; Eugene (Adele) Maurer.

Memorials may be made to St. John Women’s Guild or the Guild Quilters.