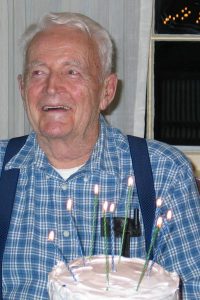 Albert “Wayne” Hagan, 87, of New Athens, IL, born October 15, 1925 in Easton, IL, died Friday, February 22, 2013 at the New Athens Home for the Aged in New Athens. Mr. Hagan was a member of VFW Post 7710 in New Athens, Laborer’s Local #459. He worked for many years at Autocrat Stove Foundry in New Athens and was also an avid hunter and fisherman for all his life. Mr. Hagan also honorably served his country in the U.S. Navy during WW2.

He is survived by his daughter Kathy Hagan of New Athens, IL, his brother Donald (Jackie) Hagan of Darmstadt, IL, a sister-in-law Lucille Isom of Lake Worth, FL and also by nieces and nephews.

Memorials may be made to The New Athens Home for the Aged.

Funeral: Services will be held on Wednesday, February 27, 2013 at 11 a.m. at Heil-Schuessler Funeral Home in New Athens, IL with the Rev. Dr. Robert Koch officiating. Burial will be at Oakridge Cemetery in New Athens, IL.