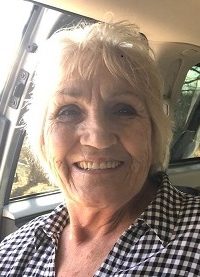 On Tuesday, December 8, 2020, Emma North (Wallenmeyer/Miller), died at the age of 79, following a courageous battle against cancer.

Emma was born February 8, 1941 in Evansville, Indiana, at home, the youngest of eight children to the late William and Mindie Wallenmeyer.
Emma attended Western Kentucky University and raised two children, Debra and Michael. Emma was grandma to Courtney Miller Malone (Luke) of Yorkshire, England, Devon Scothern of Wales, UK, and recently became a great grandmother to Courtney and Luke’s son, Jack Malone.
Emma was preceded in death by her son Michael Miller Jr (Teresa), who was killed in Slovakia while serving in the US Air Force.  She was widowed by her second husband James S. North,  who was an excellent stepfather to her children. She was also preceded in death by her brothers George Wallenmeyer, Daniel Wallenmeyer, William Wallenmeyer and Robert Wallenmeyer and sister in laws Loretta Wallenmeyer (George), Diane Wallenmeyer (William), and brother in law Joe Ives (Mindie).
Emma is survived by her daughter Debra Miller (Evansville, IN), sisters Ida Wallenmeyer (Rockville, MD), Mindie Ives (Bowling Green, KY), her brother Albert Wallenmeyer (Spottsville, KY), and many wonderful nieces and nephews.
After retiring, Emma would spend ten days every month helping her brother Albert at his farm.
Emma was compassionate, hard working, and talented.  She enjoyed sewing, knitting, and gardening.  She had a strong love of animals that she passed down to her children, and leaves behind her rescued dogs, Pete and Lilley, and two very spoiled cats, Thomas and Sassy.
Burial at Marissa Cemetery will be private.
In lieu of flowers, donations can be made to: Another Chance for Animals, 2808 N First Ave, Evansville, IN. 47710 www.acaevansville.com or Jack Malone, c/o the late Emma North, 404 West Street, Marissa, IL. 62257.
Heil-Schuessler Funeral Home in Marissa, IL is in charge of arrangements.
Share this...